The is the core forum of BFC. It's all about informal and random talk on any topic.
Forum rules
Post a new topic to begin a chat.
Any topic is acceptable, and topic drift is permissible.
Post Reply
20 posts • Page 1 of 1

I didn't think anything could stay alive for 1200 years. That's one hella tree.
Top

Although not a Baobab tree. An old abandoned nursery on I think Barrett Station Road in St. Louis County had several custom pruned Oak trees they were working on for a client. Probably back in the 1950's or earlier. What they did to the trees was top them so they only had lateral branches at first. Their were something like 30 of them set in a small square area to grow. After the nursery went bankrupt and closed a few of those near the outside corners of the square were stolen, but the rest already had too deep of roots to be cobbed.
The company that bought the property liked the clump of Oak trees in the back corner of the property, so left it alone.
I saw it for the first time around 1968, and by then you could hardly tell it was different trees.
I assume the outer perimeter of the trees girted the inner trees so they died out, and the outer ring kept growing.
Kids tore into the back side and made a clubhouse inside. I imagine in the early 1970s.
I didn't see it again until around 1981 to 1984 and it was humongous, nearly solid once again.
After I got married in 2001, we took a drive that way, but it was gone and a shopping center sat on the property.
It's a shame the cut that down, it was totally awesome!
Top

that makes my blood boil!

here at least they leave the sycamores lining the streets and cars have to weave around them in villages best they can. some of those are 3-4' across, so they've been around.

in stockholm some of the really old oaks (700-1000 yrs) have gotten hollow inside, so they just fill them up with cement and leave them standing.
Top

In one of the houses I lived in, there were seven Maple trees lining the side yard by the drive that went around behind my house.
These things were planted somewhere around 1910 to 1914 and topped every five years or so. They looked awesome, but over time they became hollow too, and long before I moved there, they were filled with concrete. A couple of years before I moved in, they were taken down to make a parking lot, and I was there the day they did this. All they did was cut the tops off, then used a bulldozer to knock them over. Odd they didn't have much of a root structure considering how long they were there.
Top

maybe the roots were going hollow, too...?
Top

We see huge trees blown over in the wind here every once in a while and the ones that do blow over have a very shallow root system.
Top

On my recent trip to South Carolina I was blown away by the number of trees felled along the highway. Tennessee had quite a few to be sure, but I think Georgia may have had more. I's guess you are right about the shallow roots. That would explain why there were so easily blown over.
Top

Heck, if I knew you were coming down to TN I could have had you put together a pooter for me, hi hi...

Certain types of trees down here, the roots rarely go below three or four feet, but spread out wide.
And when those trees are around 75 to 100 feet tall, the soft sandy soil just can't hold them up.
Top

It seems like the fallen trees I saw were substantial in girth, but short in height. That could be due to some sort of cleanup that went on before I got there. It did indeed look like sandy soil and the remains of a hurricane had recently passed through. The damage was extensive; more than I had imagined from here.

I did consider visiting friends as we passed through Tennessee, but we were on a tight schedule. Besides wife was recovering from leg surgery and could not do a lot of hopping around. We ended up in Manchester at the end of our first day of our road trip. That's not too far west from Nashville. Our destination the next day was South Carolina, and we didn't have a lot of time to linger if we were to make it by nightfall. The time it took to get to Manchester was way more than I expected, but it was a pleasant trip all the way.
Top

I'm glad you enjoyed your trip Yogi! It is beautiful country down here.
Not as warm as most folks think though. On average we are only ten degrees warmer than St. Loo.
And whatever they get in St. Loo we get three days later, hi hi...
The particular valley I live in has it's own microclimate which can be a blessing or murder.
Storm clouds that make it over the Cumberland Plateau will usually make it over Rodgers Ridge before getting trapped by a mountain.
However, if a storm cloud does drop down in our valley, it can't leave, so just keeps running up and down the valley until it dumps enough water to get light enough to climb out of here, hi hi...
I live on the north face of Rodgers Ridge. My property goes to the top, but my house is a couple hundred feet down from the top.
Top

I see that you are almost in Kentucky. We went down I75 to Atlanta which was the opposite corner of the state from where you are located. The mountains were indeed beautiful, but I've also seen the Colorado Rockies. Tennessee has nothing but hills compared to the Rockies.

While I've not lived here long enough to be familiar with the topology or the weather, it seems as if I70 is some sort of weather wall. I live a mile or two north of the highway and on several occasions have basked in sunlight while the folks across the road were getting soaked. It's not a one off thing, which is what makes me suspicious. I've also seen storms head our way, generally from Texas, and split up into tiny pieces once they reach O'Fallon. St Louis, twenty five miles east, usually gets the full brunt of it. I live on top of a ridge, nothing like where you are, but still. My basement door to the outside is at ground level as is my front door which is one floor up. We are facing south and get the full effect of solar heating, but the awesome view of the open sky is stunning. I'm very impressed with the way things look around here.
Top

Palmetto Bluff, SC, is actually less than twenty miles north of Savannah GA. I don't recall all the routes we took because my wife was the navigator. I just followed instructions. We did not go through Nashville, but went around it. Then on through Atlanta and to Savannah. We took a left turn before entering the city and headed up north to South Carolina - which sounds counter intuitive, but that's what we did.
Top

Sounds like you guys used I-20 which is a direct route to Savannah from Atlanta.
Top

I think you are right, but the last leg of the trip to Savanah was on I16. Looking at a map now from there we must have headed north on I95 toward Hilton Head.
Top

When I used to drive from St. Loo to Knoxville every other weekend, I tried all the different routes.
What Google Maps or whoever's maps they were, what they showed as the fastest route, was not always the fastest.
By the same token, the shortest route was not normally the best way to go either.
I found by taking a short-cut down Briley Parkway (I think it was) to bypass Nashville, rather than taking the normal bypass, it was a much more pleasant drive, not as congested, and most of the time ended up being faster than taking the normal bypass. Especially if it was around drive time for folks going to or coming home from work.

As an aside:
My cousin and I took a three day trip. We didn't get that far from home though. This was a local sight seeing trip through the mountains and to visit a few cities in the Carolina's. It took three days because we did not get on any highways.
A map shows Interstates. State Routes, County Road, City Roads and Streets, and a bunch of unclassified roads they indicate with the word OTHER. These road marked OTHER were the only roads we chose to make our journey.
Best trip of my life too. The things we saw you would never see unless you followed these obscure roads, aka the road less traveled. Met lot's of wonderful people, found cool home-style places to eat. Amazing unknown roadside attractions only the locals usually knew about. I would do this again in a heartbeat!
As I said, it took us three days to get to a couple of cities we could have gone to in about three hours drive time, hi hi...
Top

Just ran across another photo of the infamous Baobob tree. This one is said to be 1000 years old. 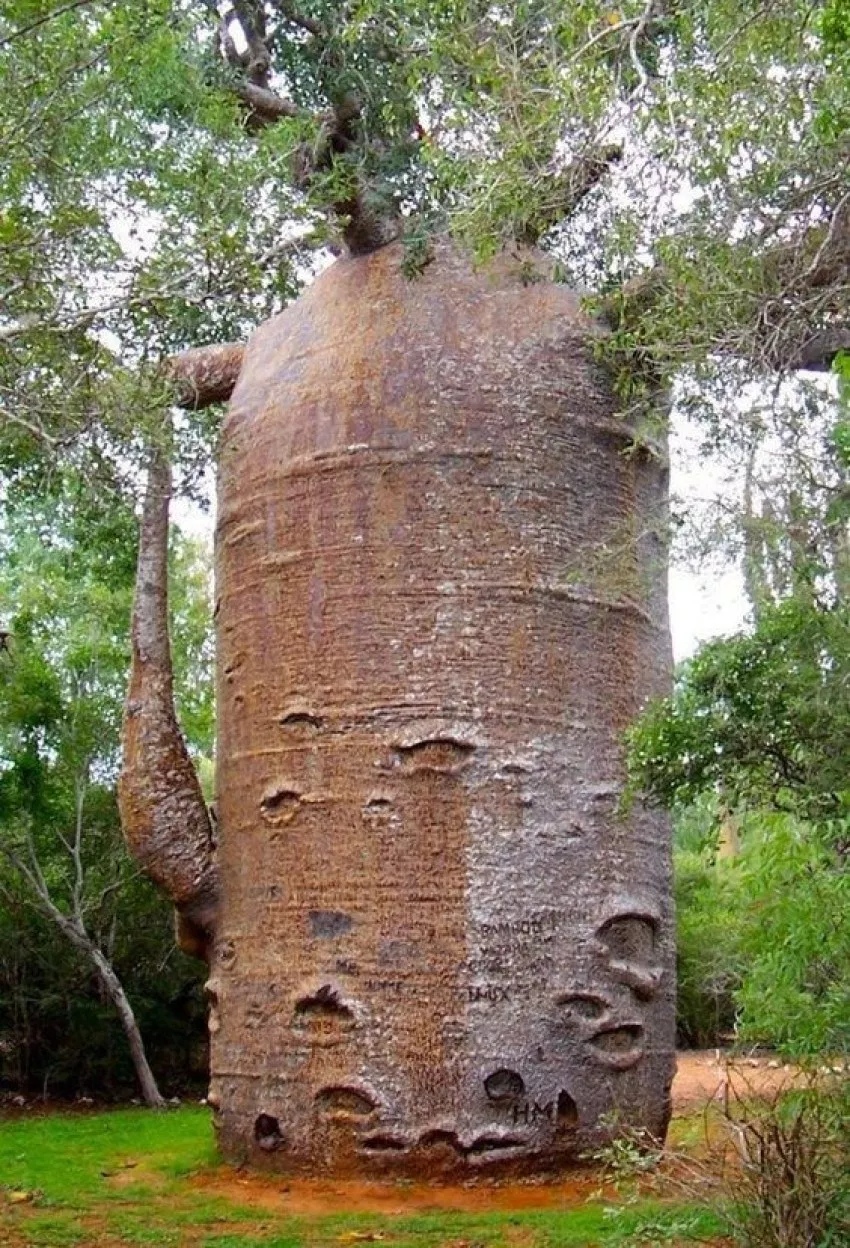