Become part of the brainformation Internet experience. Write your story here.
Forum rules
Topics should be about experiences, comments, and observations from our members' personal lives.
Post Reply
18 posts • Page 1 of 1

I was looking for a way to say this in my own words, but John Schindler is so much more eloquent.

Spy bosses are by nature the most tight-lipped of people. Those who head our intelligence agencies got there in no small part by knowing precisely what to say to whom, when. In recent decades, as the heads of Western intelligence have emerged from the shadows and are expected to make occasional public statements, their utterances are customarily vague, requiring extensive tea-leaf analysis to derive their actual meanings.

Even in retirement, spymasters remain habitually enigmatic, and none has been more so than James Clapper, who is our nation’s most experienced spy boss. He retired as the Director of National Intelligence at the beginning of 2017, after over six years in that job—a record. That capped off a career in our Intelligence Community that lasted more than a half-century and included the directorships of two of our nation’s spy agencies. Nobody knows the IC better than Clapper.

While his career had its ups and downs—you don’t work in any trade for over 50 years without missteps—the former far outweighed the latter. Clapper, a retired Air Force three-star general, is widely respected in national security circles, across partisan lines, as a guy who knows his stuff and focuses on the job. Naturally, he’s exceptionally discreet as well.

That changed yesterday, when Clapper went on CNN to drop an unimaginably large bombshell on President Donald Trump. Since the inauguration in January, Clapper has made a few critical comments regarding the president and his strange ties to Moscow, but these have been largely anodyne. Clapper began showing his hand in September, with a comment that the IC assessment of Russian interference in the 2016 election raised questions about why Trump was in the White House: it “cast doubt on the legitimacy of his victory in the election,” he stated.

At the end of October, in an interview with Politico, Clapper added more about Kremlin interference in the 2016 election: “The Russians have succeeded, I believe, beyond their wildest expectations.” Clapper dismissed President Trump’s repeated attacks on the investigation of his Moscow links as “fake news” with a warning that the Russians “have been emboldened and they will continue to do this.”

Clapper went considerably further yesterday in his appearance on CNN’s The Lead, in which he finally let his top secret mask drop to say what he really thinks about our 45th president:

I think this past weekend is illustrative of what a great case officer Vladimir Putin is. He knows how to handle an asset, and that’s what he’s doing with the president … You have to remember Putin’s background. He’s a KGB officer. That’s what they do. They recruit assets. And I think some of that experience and instincts of Putin has come into play here in his managing of a pretty important account for him, if I could use that term, with our president.

When pressed about what exactly he was saying, Clapper explained that he meant his words “figuratively,” but that barely mitigates the shock value of what he said. To be perfectly clear: America’s most experienced spy boss publicly termed our president an asset—that is, a witting agent—of the Kremlin who is being controlled by Vladimir Putin. Even if meant only “figuratively,” this is the most jaw-dropping statement ever uttered about any American president by any serious commentator.

Besides, there’s not much difference between literally and figuratively when we’re talking about the inhabitant of the Oval Office. If the American president is being controlled or unduly influenced by a country that’s hostile to us, that’s a big deal. This, of course, is precisely what Special Counsel Robert Mueller and his investigation are trying to get to the bottom of—and, not coincidentally, what President Trump and his supporters are trying just as hard to prevent Team Mueller from unraveling.

It needs to be stated that Jim Clapper’s words, while shocking to the public, are utterly uncontroversial in American intelligence circles (or with our spy partners worldwide, for that matter). In our Intelligence Community, it’s widely understood that Donald Trump possesses longstanding ties to the Kremlin which are at best suspect and at worst reflective of an unsettling degree of Russian influence over our commander-in-chief.

Although I’ve been out of the IC for more than a decade, even then it was known in counterintelligence circles that some of Trump’s Kremlin connections were questionable. Although Trump is too psychologically unstable to be a bona fide spy for anybody, that he possessed strange linkages to Moscow was hardly a big secret.

In particular, Trump’s flashy 1987 trip to the Soviet Union – an obvious KGB operation to anyone versed in Chekist matters – led to his becoming an apparent agent of influence for Moscow. That is, a conduit for political favors and information, often in exchange for commercial deals of the sort Trump has always prized. Knowing this, the history of the Trump Organization over the last few decades takes on a different coloration.

What exactly is Donald Trump’s relationship to Vladimir Putin and the Kremlin? It seems likely that nobody outside Moscow knows the full story, and we should expect it will take years of investigation by Team Mueller and the IC to unravel this murky three-decade saga. The well-honed Chekist habit of planting disinformation to throw Western counterspies off course, which already seems to be at work in the Trump investigation, promises to drag this inquiry out even longer. Don’t plan on pleasant answers either.

Regardless, Jim Clapper has done our country a valuable service by stating the plain truth about our president. On CNN, he was speaking for all our intelligence professionals who must remain silent because of the lifetime secrecy oaths they took to join the Intelligence Community. After months of public White House attacks on the IC, which have now escalated into all-out war on America’s spies by Team Trump, there is finally some open pushback by the spooks.

This isn’t the mythical Deep State, which Trumpists detect lurking behind every tree in Washington. This was Jim Clapper, now a private citizen, speaking his mind as a highly experienced intelligence officer. The impact of his words can be fairly assessed as devastating to anyone who’s paying attention. Nor will Clapper be the last former spook to go public with his thoughts on Donald Trump and the Russians.

John Schindler is a security expert and former National Security Agency analyst and counterintelligence officer. A specialist in espionage and terrorism, he’s also been a Navy officer and a War College professor. He’s published four books and is on Twitter at @20committee.

i'm a wee bit baffled here... i've known this forever and a day and i'm not brightest bulb in the box, so... why is this such a shocking revelation?

meaning: most people know/have known and he's still there and nothing has been done, so i expect nothing will be done? for how long?
Top

You obviously are more enlightened than this naive old man. My understanding of the democratic government we live under is that there are checks and balances built into the system in order to prevent what we see happening today. Of course, no system of governance is perfect, but we have been the standard of democratic governance for many decades. To see a foreign government, a long recognized enemy of our way of life, assume control literally over night is beyond astounding. The rest of the world shakes its head in disbelief that we would do such a thing, and that is not so hard to understand. What is shocking is the fact that so many Americans voted for this change and the checks and balances upon which our system is based is being dismantled before our very eyes. It's not just one weak mind being controlled from Moscow. That may not surprise you. The degree of complicity in a coverup, however, is unprecedented in all our history.
Top

for me it's the family circus let run amok with whatever they feel like doing at any given time that really makes me feel ill. ok, one crazy dude with his cronies, but literally having turned the US of A into a kingdom with all the customary "nobility" to go with it.

and look at melania's expression... every so often there are tweets from "her", but i don't believe for a sec they're anything else than WH trying to make her look interested. i think she's depressed...
Top

Malania does only what she is allowed to do. Mainly that is not take the attention away from her hubby. There was a divorce in the making before the election but now she is the perfect supportive wife. It's probably in her contract.
Top

I'd guess the first place she would go is to a divorce lawyer. A lot depends on exactly how 'he' ends his tenure at the White House.
Top

Well, At least 45th has achieved something. We have been downtalked about since Poinsett, and the world took that lead. It hasn't been since the start of his campaign.
Top

i don't quite understand what you mean as i'm not familiar with Poinsett and google wasn't very helpful.
Top

Joel Roberts Poinsett was the first U.S. Ambassador to Mexico. He also set, under the Monroe Doctrine, the first purchase intention for the then Northern States, preceding 22 years the U.S. - Mexico war. What may have appeared first in Google was that internationally, the Mexican native Cuetlalxochitl, or Christmas Eve flower, was named after him as Poinsettia.

of course, me being very interested in languages and plant; i had to look up poinsettia and came up with a lot of info in them. everything but how to it turn colours again.

They require TOTAL darkness in order to turn red again. It's a simple process but not necessarily easy to do. https://www.growingagreenerworld.com/tu ... red-again/
Top

I didn't take much attention to that. I just marvel when the bushes in the neighborhood sidewalks begin to get full and the bracts naturally turn red since late october, and then the true flower blossoms in December... By now some of the bushes have lost the red bracts and the blossoms are dithering, so it is turning to "normal" bushes... Now to wait for the purple of Jacarandas...
Top

It never occurred to me that the color change would happen naturally. I thought it had to be forced. We have three plants in the house right now and I will try to keep them going during the year to see what happens.

I want one of these in my back yard. WOW 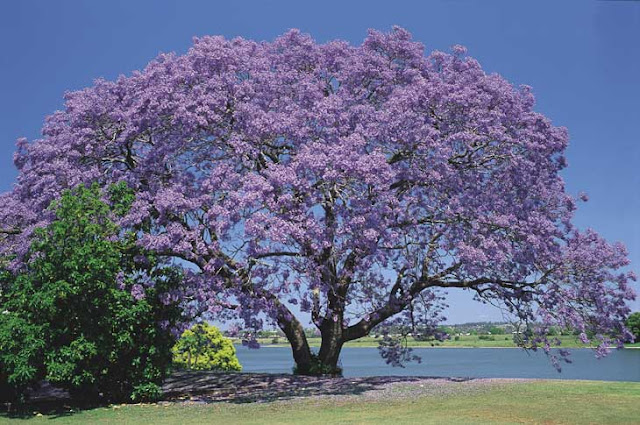 i love the wisteria that some people have blooming all over their yards: Well, I'm more used to look at them like in this article:

The landscape is truly beautiful. Now, if you could only do something about those annoying earthquakes.
Top
Post Reply
18 posts • Page 1 of 1